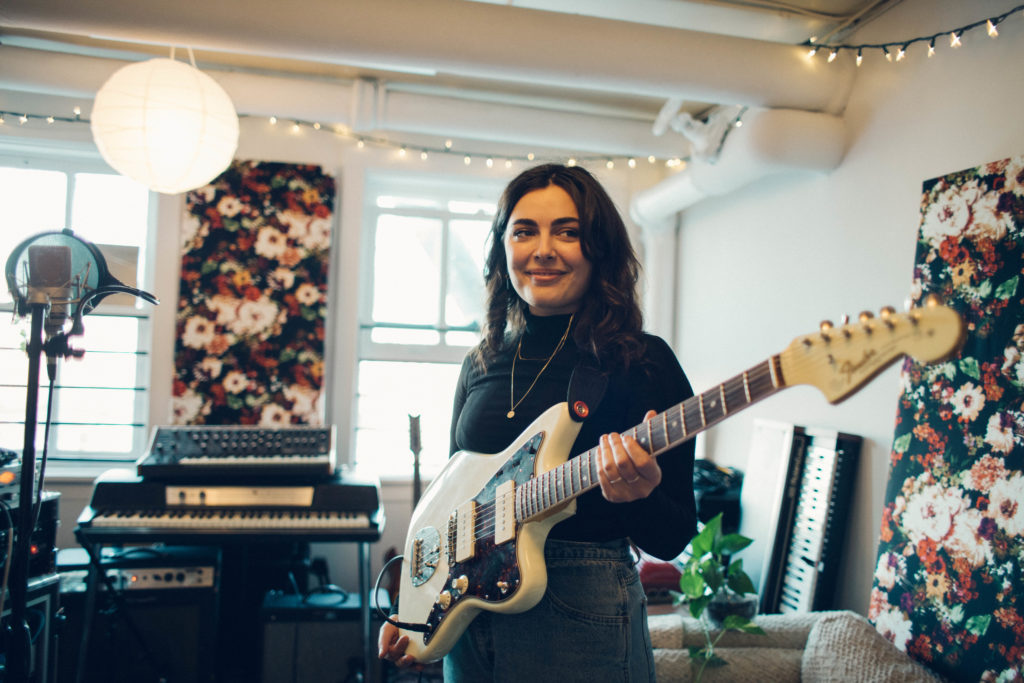 Humble, enthusiastic, talented and raring to go, Lindsay Thomson is the face of the band LLUX, a musical project that is brand new to the Winnipeg scene. Though they’ve only had a handful of local shows, LLUX is already set to release their debut album. The band also features Cole Zabloski (lead guitar, vocals,) Jason Bowes (keys, vocals,) Mitchell Schimnowski (bass) and Julian Brown (drums.)

“I feel like this EP is everything that I want and everything I’ve ever strived for with my sound to be,” said Thomson.

We can expect LLUX’s first five-song EP, The Drive, with a delayed release date of May 1, 2020.

As a child, Thomson was encouraged to participate in dance and sports but instead she became intrigued with guitar and convinced her parents to buy her one after watching a classic 1980’s film. “I was nine when I watched Back to the Future and I saw that scene where Michael J. Fox plays Johnny B. Goode, and I thought ‘oh my gosh, I want to play guitar,’” said Thomson.

“My parents were […] looking for the cheapest thing because they thought ‘well she’ll pick it up and maybe learn how to play a song or two and forget about it.’”

Is it too cliche to say the rest is history? After attending group lessons, Thomson started writing her own music at about age 12, mostly diary entries about crushes and being grounded, with simple three chord progressions. “I was grounded a lot when I was younger so I wrote a lot,” she remembered.

“I just had so much attitude and I talked back constantly. I have apologized recently to my family about that. I feel like I was pretty dramatic . . still am.”

Thomson started playing in a cover band in her hometown of Kenora, Ontario at age 15, but stopped writing music for a while to focus on classical guitar, as she decided to take music further in a post secondary institution. After high school, she attended Carleton University in Ottawa to attend the song writing stream and achieve her Bachelor of Music. “Instead of taking private classes for an instrument you would have a song writing coach. So I studied there with Lynn Miles, Juno-award-winning Lynn Miles! She was phenomenal.”

It’s at Carleton where Thomson started to discover the musician she wanted to become. “It was very much folky, singer-songwriter feel,” she said.

“I played primarily on an acoustic guitar so it sounded folky and some stuff sounded like country-esque. As much as I loved writing it and performing it, I wasn’t really performing the music I liked playing.”

It was in her second year that she purchased a guitar off of Kijiji to start a rock band. She started the band LUX with three other women who also attended Carleton. While living in Ottawa, Lindsay performed as LUX with Justine Walker (drums,)  Elizabeth Iverson (keys and vocals) and Melinda Caputo (bass and vocals.) “Playing in a rock band, playing the electric guitar, I always wanted to be Joan Jett but I could never write like that,” she said.

“But when I got in a group and we were all playing together I felt like this is really what I want to do.”

Thomson reluctantly returned home to Kenora after graduating and the eventual disbandment of LUX. “I was bummed when we decided to part ways so I moved home and I thought ‘I am still going to play music, play the music I want to play, and I want to record an EP with all the music I had been writing.’”

One night, her current guitarist and long time musical support and bandmate, Cole Zabloski, called Thomson at 3:00AM to tell her that he met the person she needed to record her EP with. He had chatted with and acquired the contact information of producer Murray Pulver at a Joey Landreth concert. “I had to do very little research before I decided that Murray was definitely a producer that I wanted to approach to work with for the EP,” said Thomson

“I thought, I am just going to email him and see if he would want to chat about it.”

The professional relationship worked perfect for Thomson and she recorded her first song with him and later on her EP with session musicians at Stereobus Recording. “We worked a lot on arrangements of songs and I felt really comfortable being really honest about how I wanted it to sound and Murray made my dreams come true with the music I brought for the project and I feel really blessed that we were able to connect for this.”

She released the first song under her name, Lindsay Thomson, but it didn’t suit her current ethos. She always imagined being in a band called LUX at a young age, and Thomson didn’t want to let go of that dream when her first band hadn’t lasted as long as she would have hoped. She contacted LUX and had their permission to perform and record under the new revamped LLUX. “I had their blessing to have the name live on.”

Lindsay moved to Winnipeg after the EP was recorded and spent her time collecting friends, mentors, and asking questions to anyone that would lend her an ear. “It felt really honest, everyone was really supportive,” said Thomson.

“I was eager to ask people about their experience in the music scene and no one ever turned me away from asking questions.”

LLUX had their Winnipeg premiere opening for Brandon Post at Le Garage, followed by another gig at the Goodwill Social Club on a Real Love Thursday, a dream come true after witnessing Boniface play the sold out venue just months prior.

“It’s a really cool feeling to be up on stage and realize this is why I work towards this, this feeling is special. It really puts things into perspective and I feel proud to be working towards something that makes me feel so great,” she said.

The album is being released amid a worldwide pandemic, which Thomson wondered if it would be the right time or appropriate. However, mentor and Artist and Music Industry Development Coordinator at Manitoba Music, Elise Roller, encouraged her to share her music as scheduled.

“Maybe some people need music at this time and if I can help anybody by releasing a song that someone likes, that would be special.”