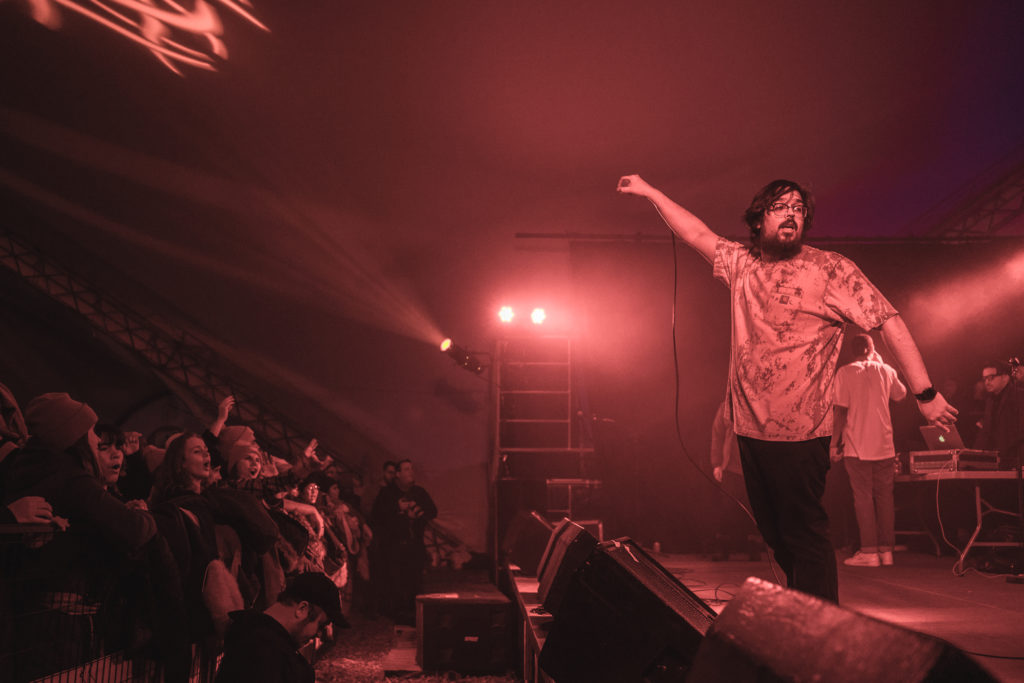 Festival du Voyageur kicked off its 51st annual celebration Friday, February 14, much to the delight of many Winnipeggers, as the festival sold out each night of the weekend. The line-up this year is by far the most genre diverse and star-power impressive. This is also reflective in the dramatic ticket price increase over time (full festival passes were just $32 five years ago,) though the price is more than justified and the festival has really evolved since then. If we had to pay for individual concert tickets to catch all the artists we saw this weekend, we would be in the red on the first night!

The first show we attended was Veneer at the Forest Tent. With pink and red berets and a beautiful Dee Barsy painted backdrop, they played a tender show featuring new songs and handed out audience addressed Valentines.

The Bell MTS tent provided larger than life, arena style performances. The sound is excellent, the lighting is stunning, and the bands were up to meet the challenge of winning over a thousand new fans. We arrived in time to catch Yes We Mystic and stayed for the Zolas, and the headlining Attica Riots. The expansion of the tent was intended to increase the capacity and reduce the line-up but that didn’t help much with folks still waiting in line to get in. When you get in the MTS tent, you are there for the night. All three bands provided a high energy performance. Swapping instruments, going in to the audience, power lunges and windmill guitar playing; it was all very dramatic but the songs were there and the crowd was loving it. 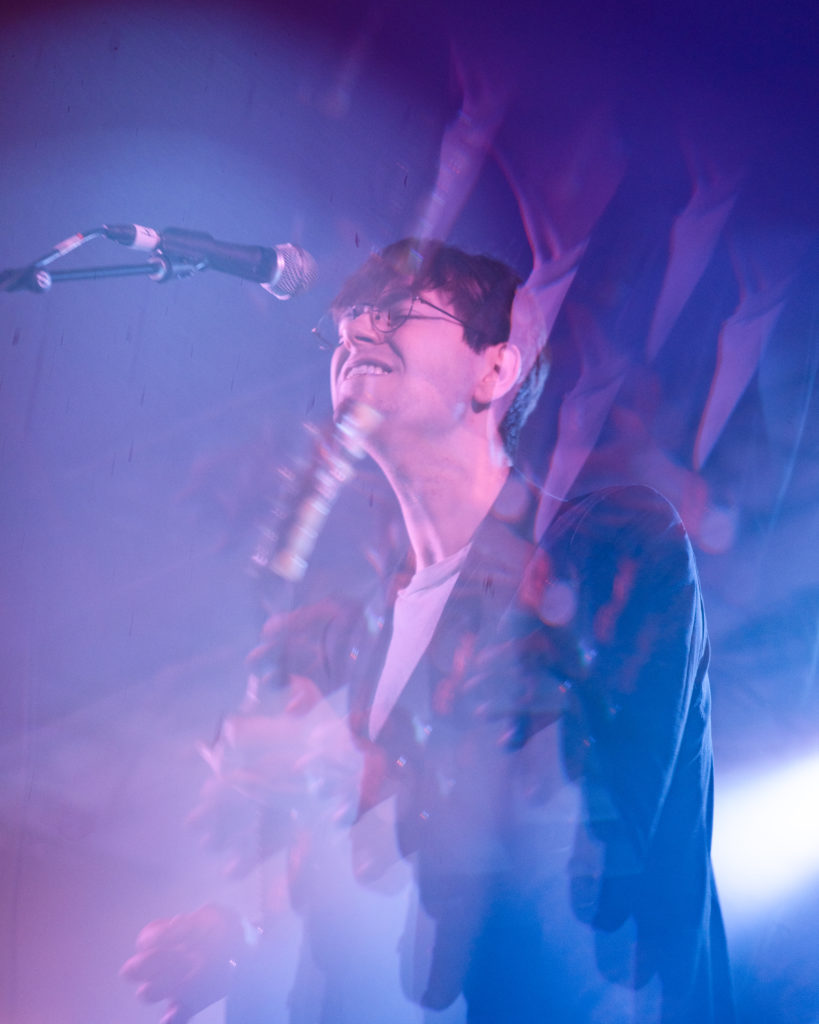 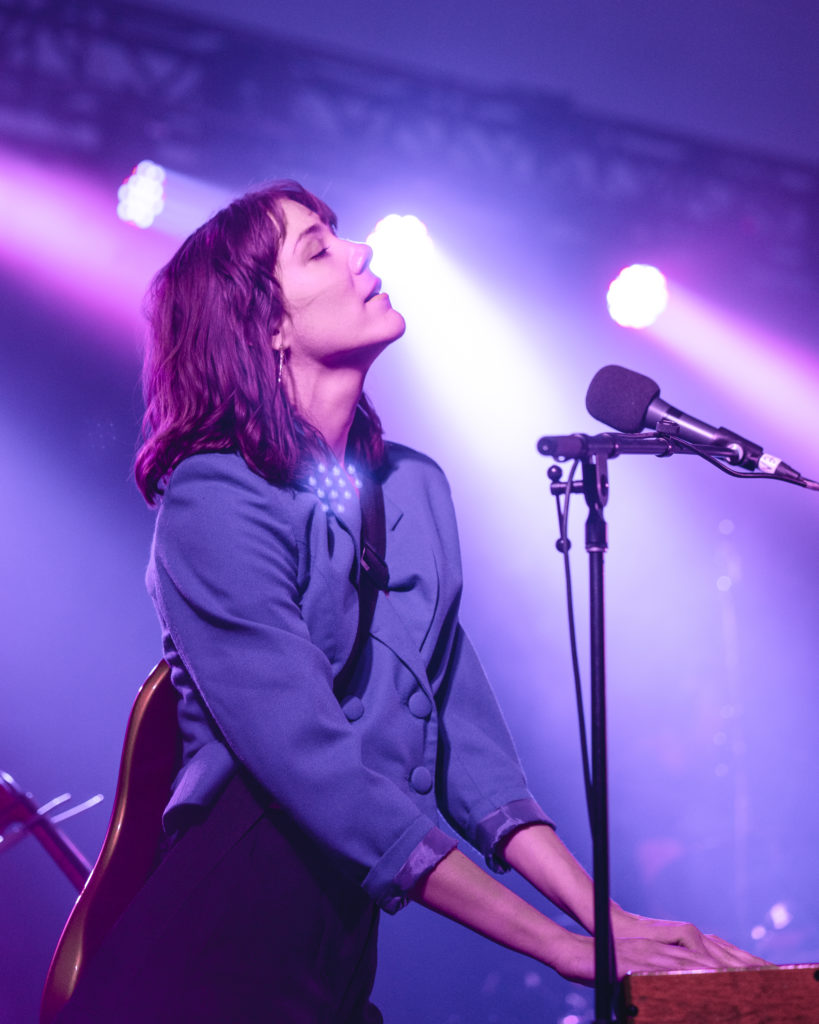 The MTS tent brings out theatrics in all the performances. Though local bands you’ve seen before are playing, you most likely haven’t seen them play like this before. The audience is already partying, the energy is already there, and the crowd is at the mercy of the performance (a few warm-up He-Ho’s usually do the trick.)

The team split forces for Saturday night, Olivia in the MTS tent and Jared bouncing between the other tents with little to no line-up.

Jared started his evening by exploring the smaller tents and venues. Starting at Le Foyer, catching an intimate performance from Mélanie Bédard, with Dave Gagnon joining on guitar. After that, the evening continued with a Cover Night at the Snow Tent. Ode to Beck had an electric crowd jamming to some (you guessed it) Beck covers; playing his hits and even some deep cuts. Rayannah closed out the night with a beautiful Shania Twain set. It combined her incredible range with memorable Shania jams we all grew up dancing to.

Sometimes we get caught up in the headliners that we tend to forget about all the other amazing venues Festival has to offer. It was refreshing getting to experience the energy that each tent offered. Whether you’re at the Snow Tent, Sugar Shack or the Bell MTS Riviere-Rouge Tent, Festival has done an excellent job of showcasing immense talent regardless of the venue size.

The MTS tent featured locals Ami Cheon, 3Peat, and Royal Canoe. Ami flexed her vocal range, runs, and smooth soulful sound, before an outfit change which brought some higher energy tunes. Her groove really clicked in with Kenzie Jane on back-up vocals and Kevin Waters locked in on drums. 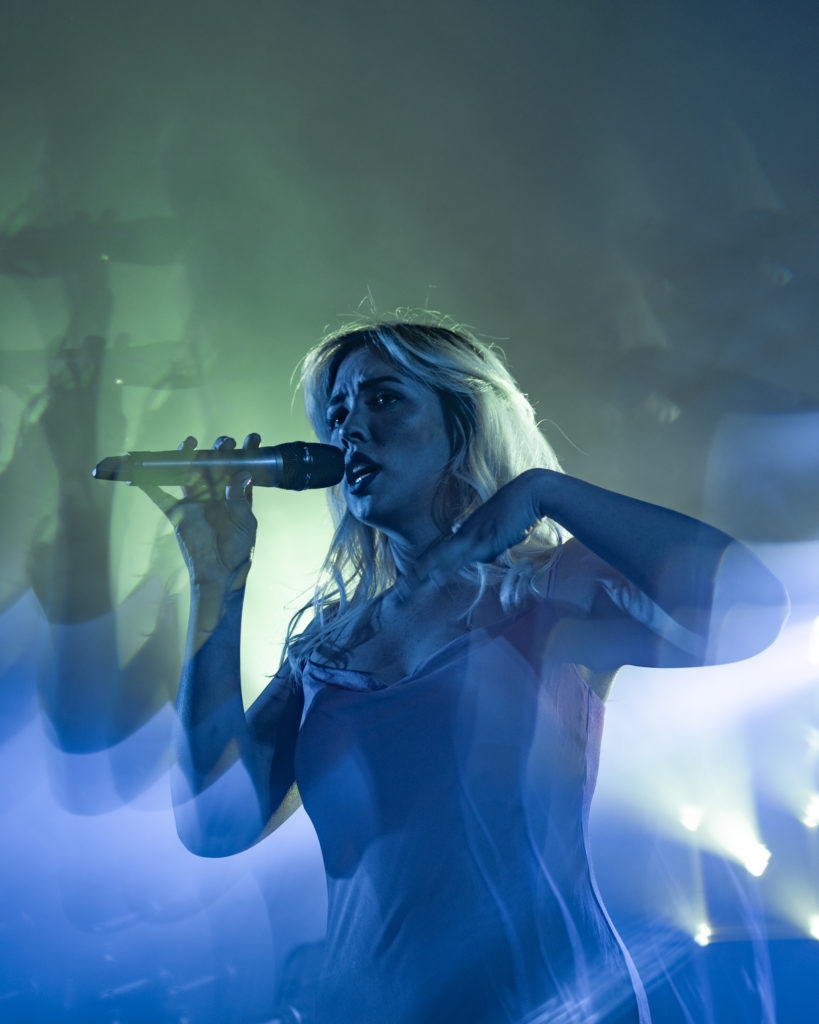 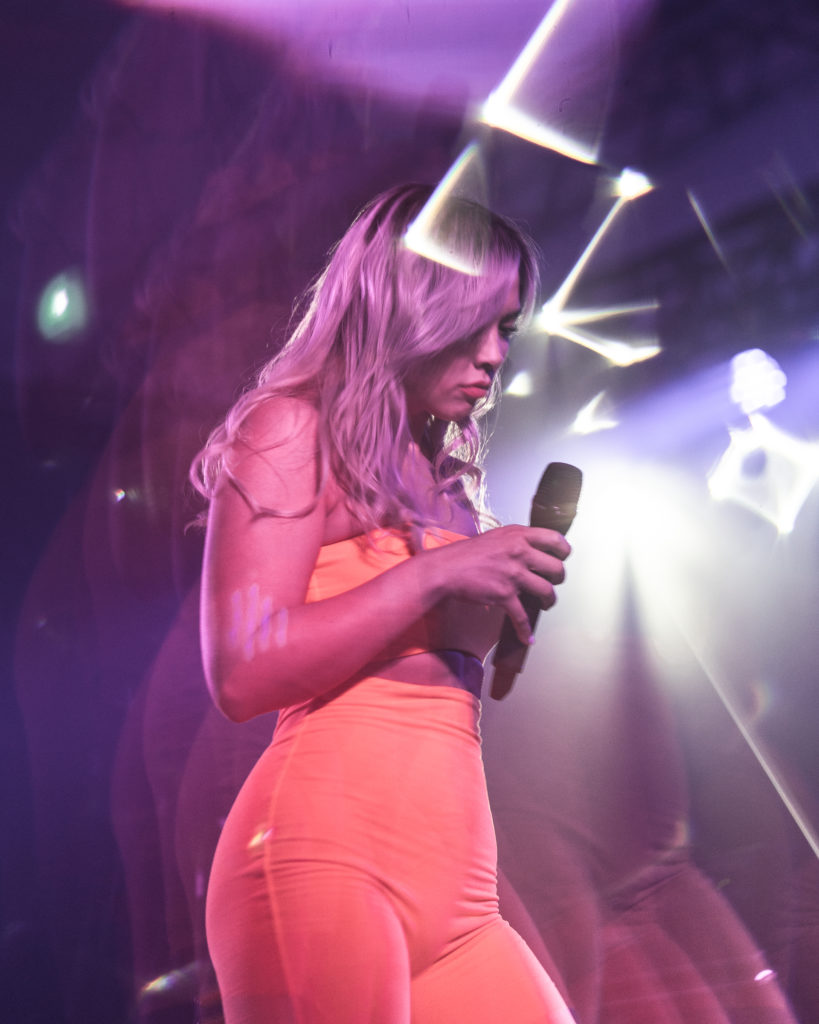 Following Ami was 3peat, who were joined by approximately seven other people who stood on stage, only one of whom also performed, Charlie Fettah. It was great to see everyone back together again, after E.GG was not living and performing in Winnipeg for a while. The energy is always there, Steve climbing on speakers to the edge of the stage and hyping the crowd expertly, E.GG humbly keeping his complex verses in check, and Dill the Giant always providing those good smooth feel good vibes with his words and ethos.

By the end of the show the whole crowd was in it. 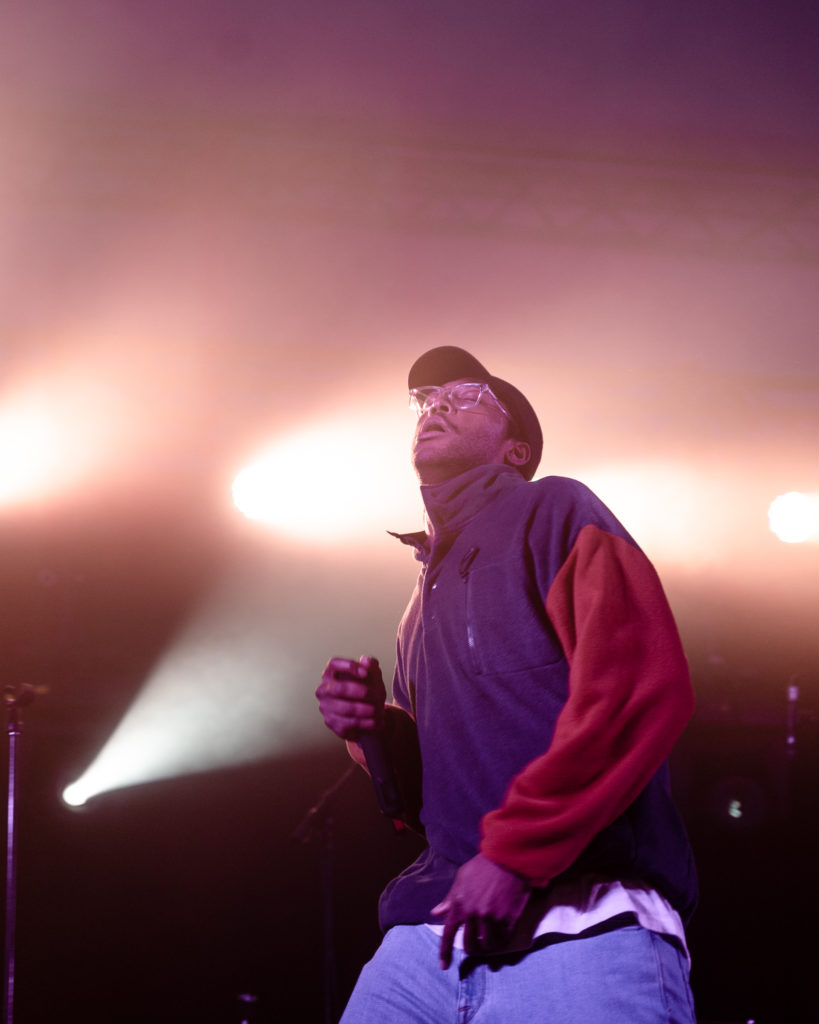 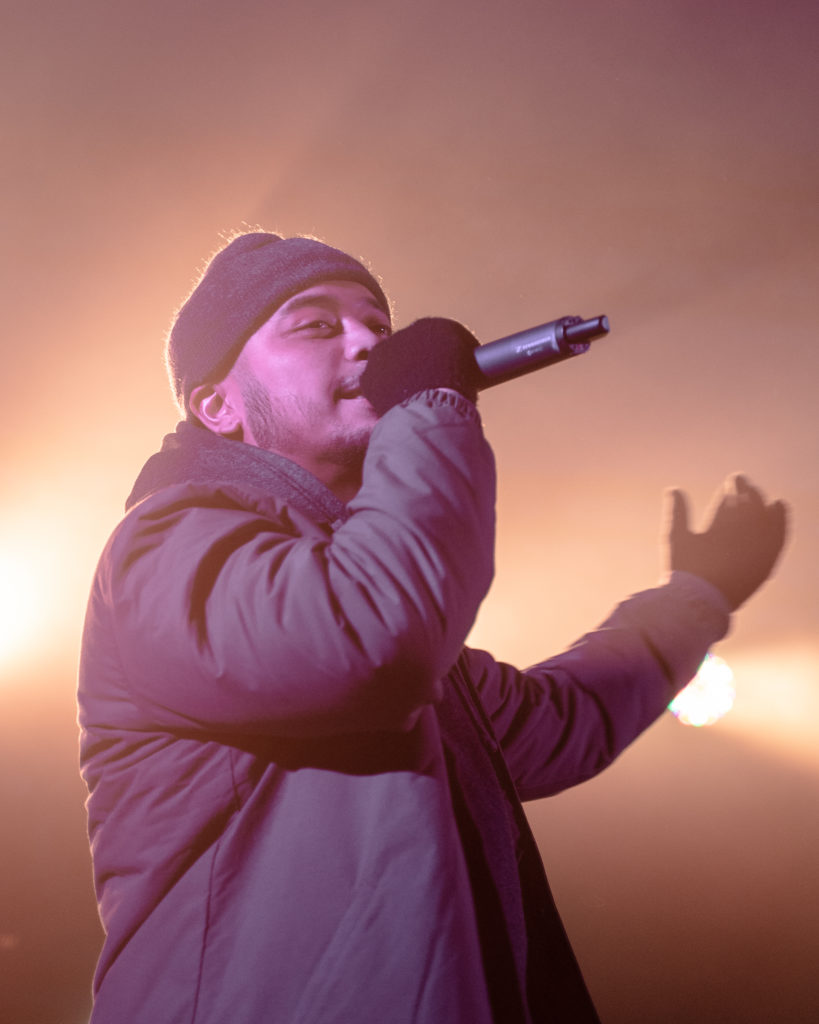 Royal Canoe closed the night sporting bright coloured outfits, which brought back a bit of nostalgia to the Something Got Lost Between Here and the Orbit era. Tight as usual and bringing back some of the classics, Royal Canoe was a definite crowd pleaser. The energy from their guitarist Bucky Dreidger was a show highlight as he explored the stage and expressed the music wholistically, head to toe. They also brought on 3peat to perform songs from their RC3PO collaboration, “Mo’ Bing” and “Twist My Brain.” 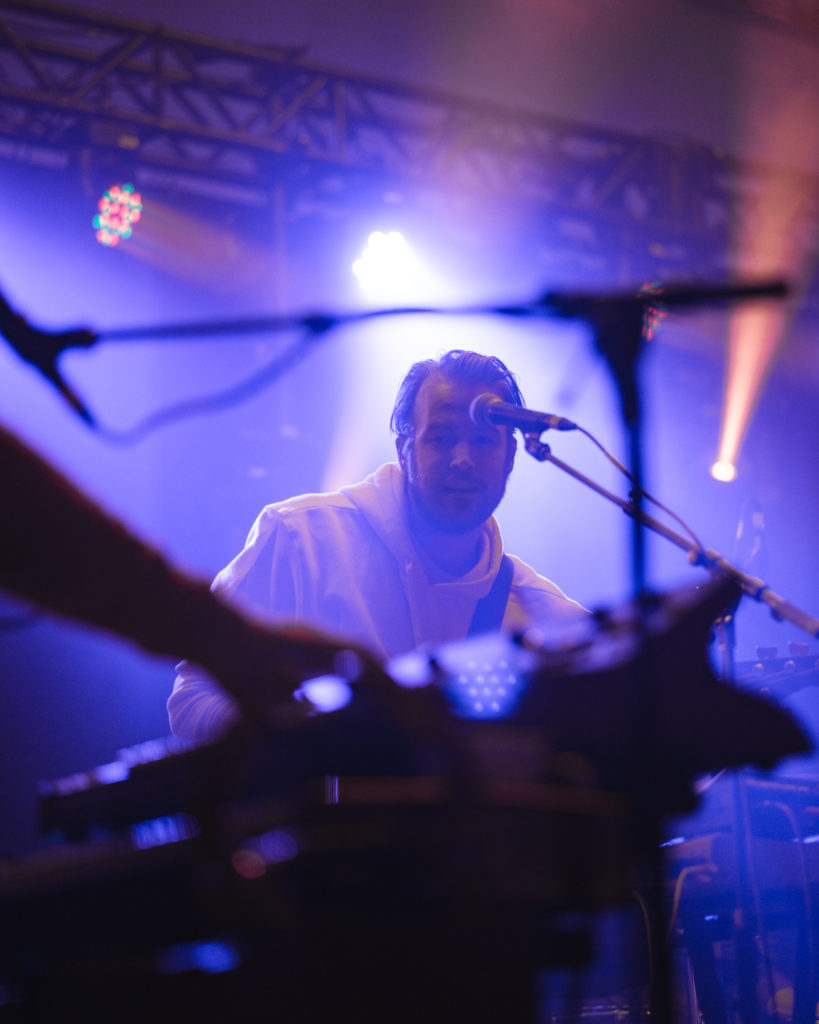 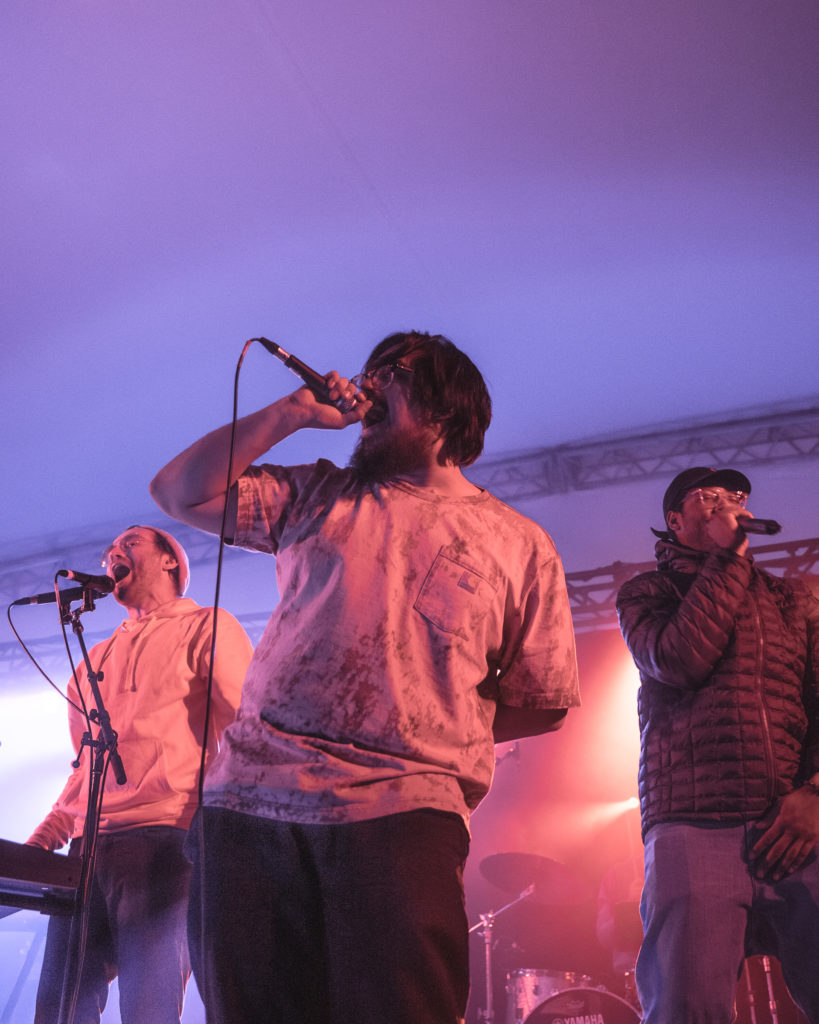 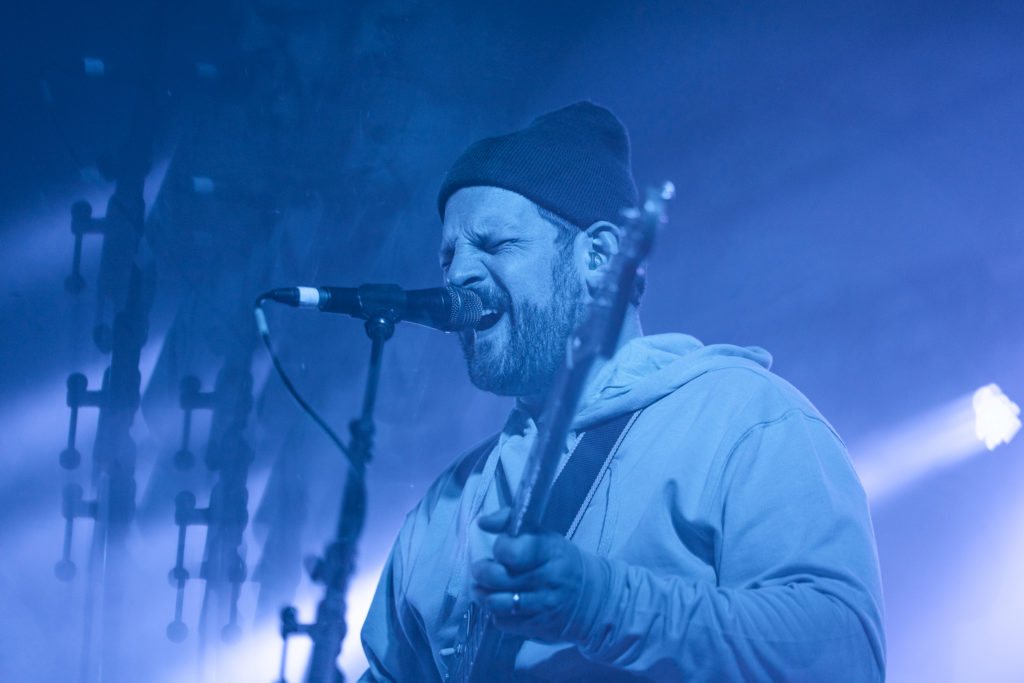 The team regrouped Sunday afternoon to explore to interview some of the artists playing that evening and even chatting with bronze sculptor, Wayne Stranger. He is one of the snow sculptors in this year’s International Snow Sculpture Symposium, hailing from Peguis First Nation. If you haven’t already seen his piece “Return From The Mountain”, we highly recommend checking it out, along with all the other amazing art on display. 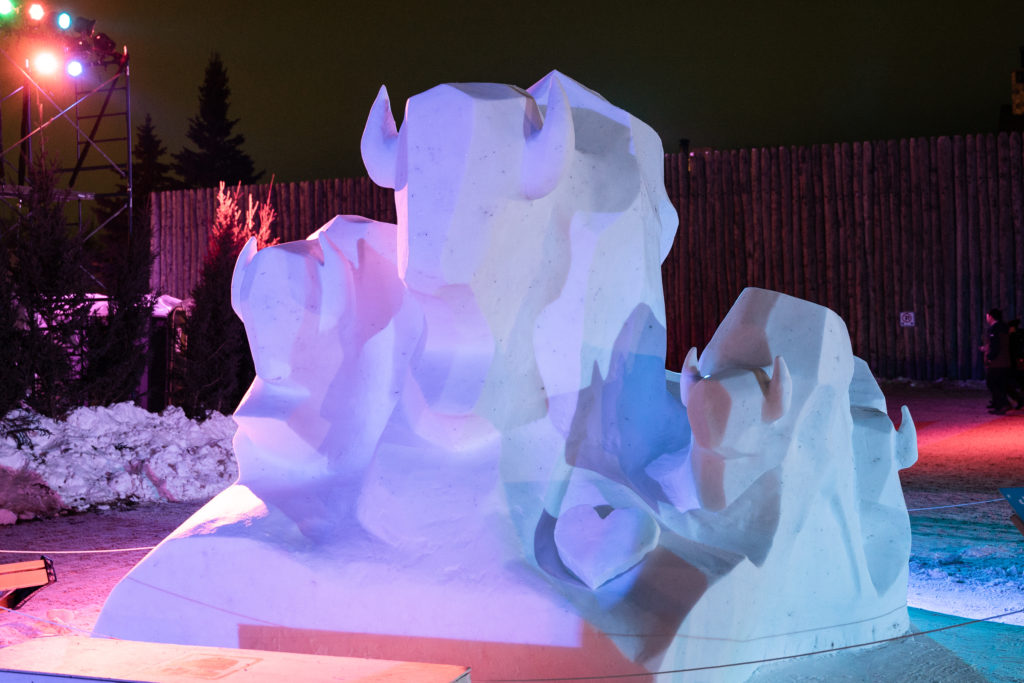 It felt like roles reversed on Sunday night as the Snow Tent reached capacity well before the Bell MTS Riviere-Rouge Tent. Regardless, Ariel Posen rocked out to an enthusiastic audience, showcasing some of that raw talent that landed him the accolade of being one of the top guitarists from 2019 by Music Radar. The chemistry between him and his bandmates was undeniable and made for a very well composed, fun performance. 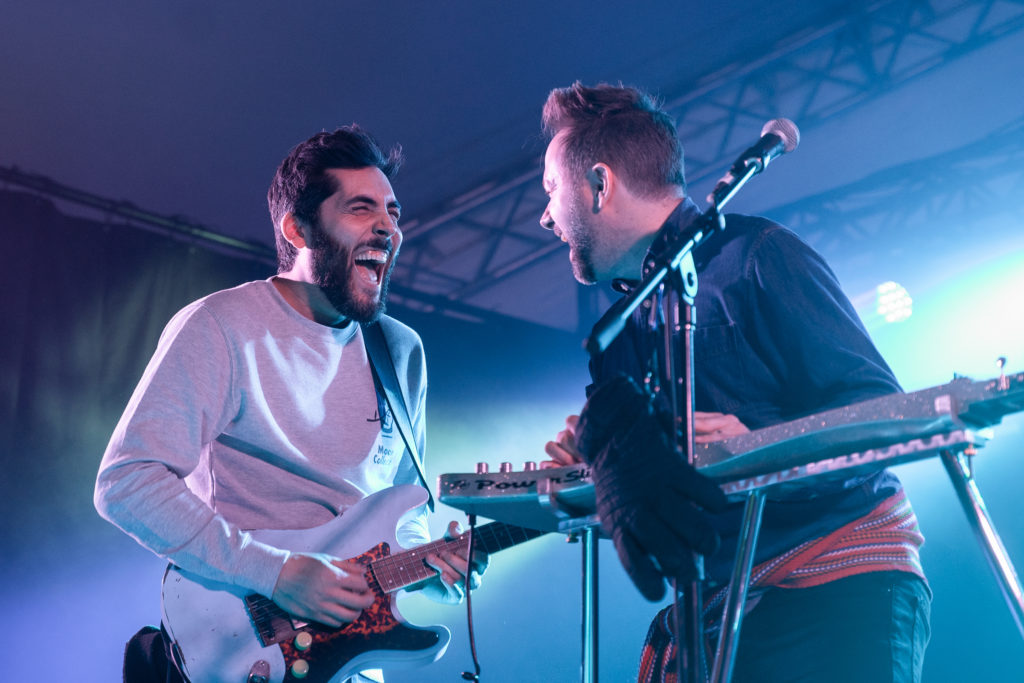 Mise en Scene took the stage shortly after with another trademark Mise performance. They have the ability to grab everyone in the room’s attention and hold it for an entire set length. Between Stef’s witty banter between songs and Paige Drobot ripping on the guitar, this set ranks up there with some of our favourite Mise en Scene performances. 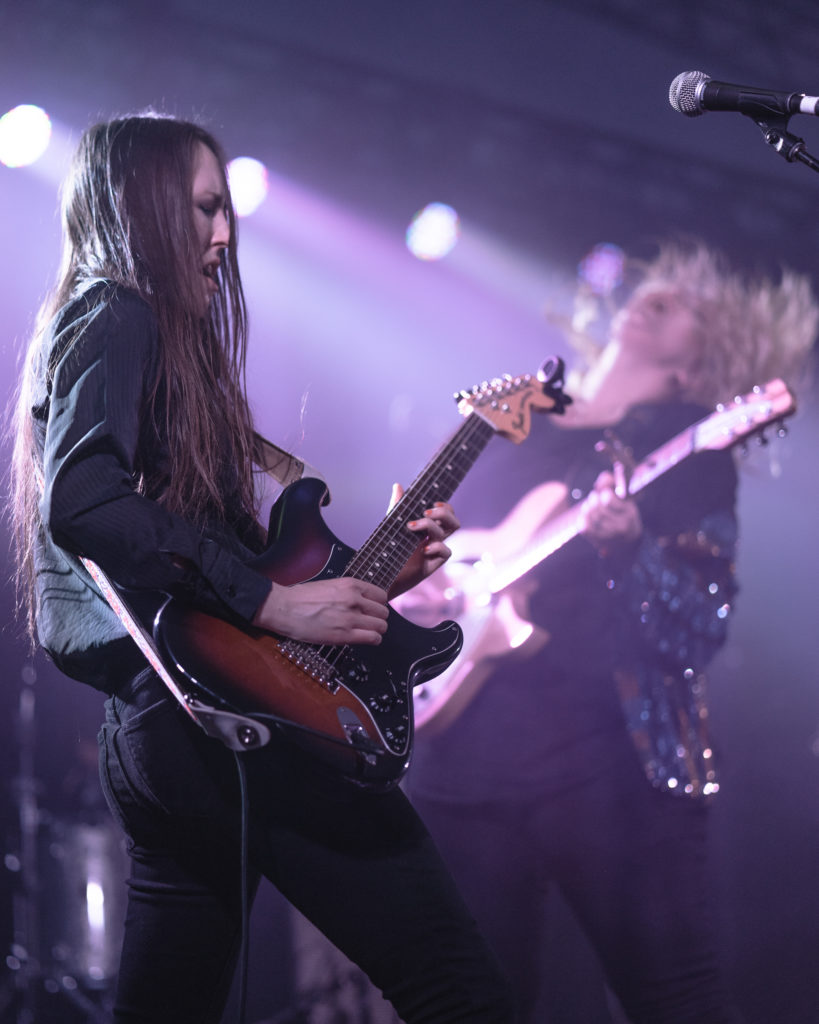 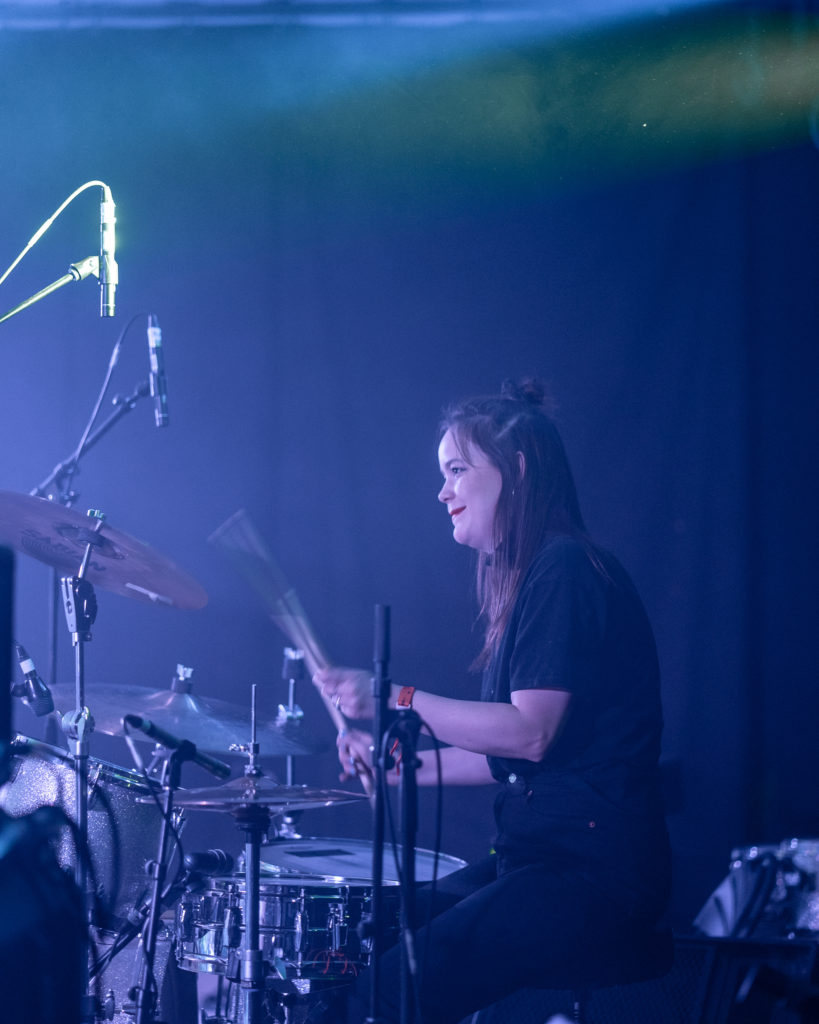 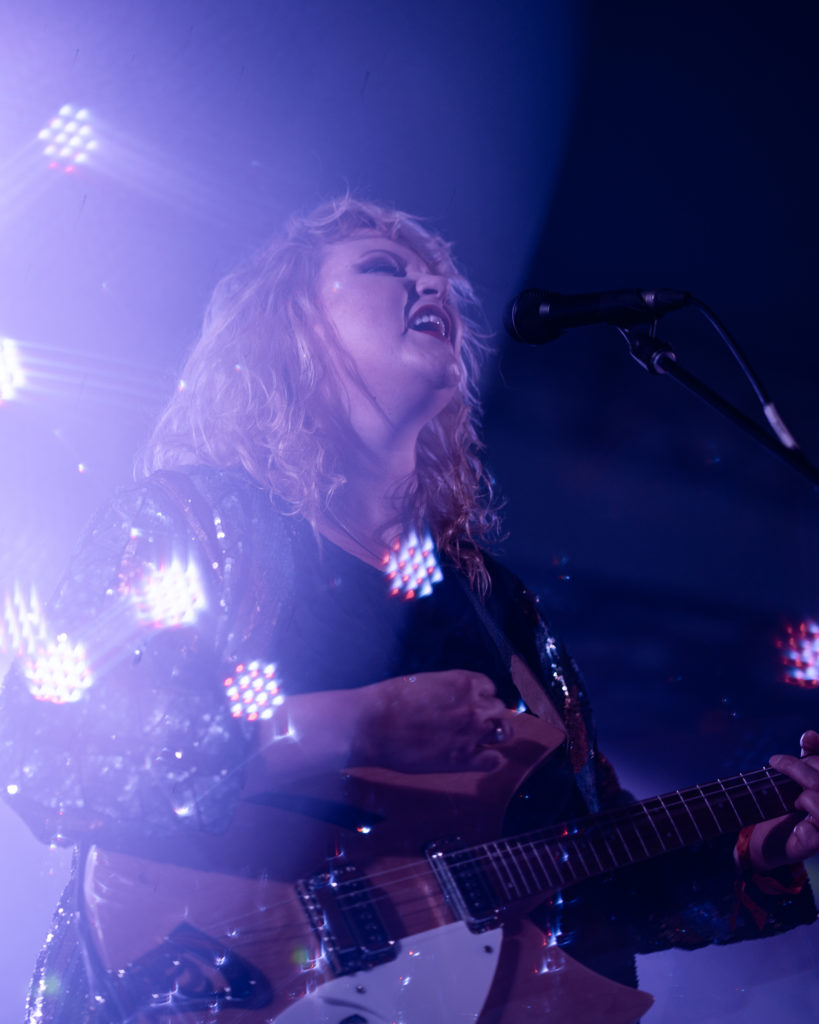 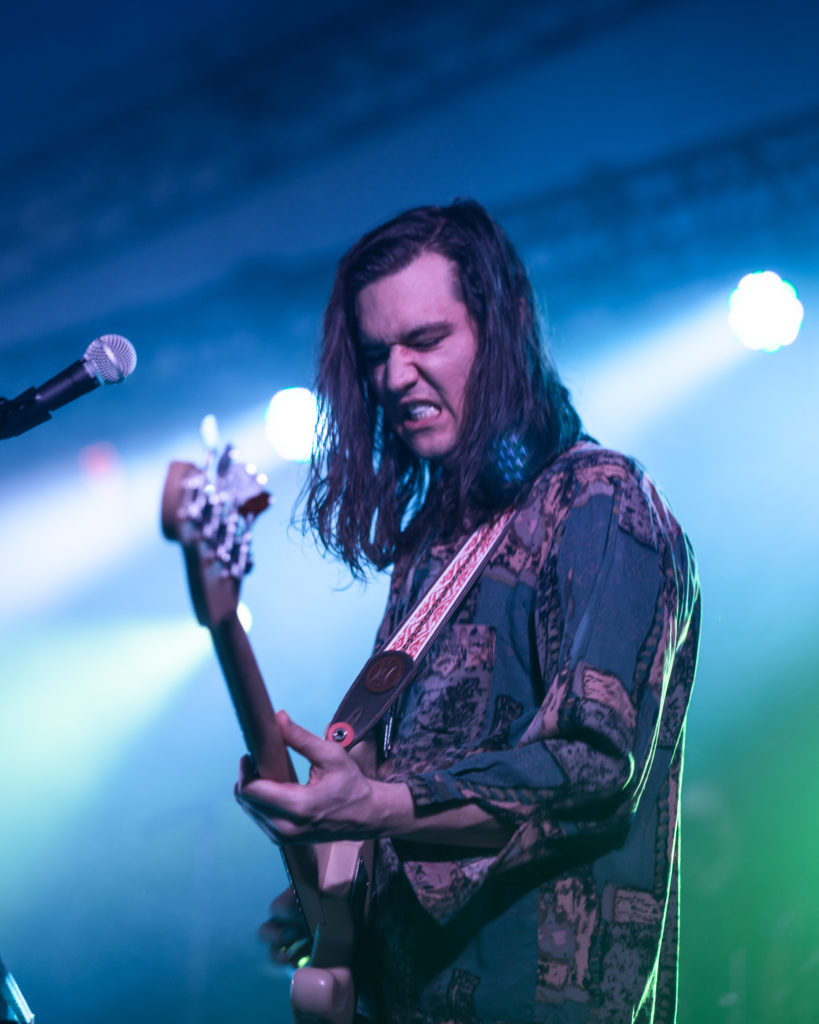 Having not seen Moon Tan in quite some time, it was truly mind blowing how extremely tight their sound and performance has gotten. It was definitely the most authentic performance on the MTS stage, and they sounded absolutely incredible. The audience, who presumably some of them were there to see Boniface, were head banging, throwing their horns in the air, and hanging on every riff, slap, and solo. The crowd begged for an encore unlike any other show this weekend but they weren’t granted another tasty tune. Moon Tan rips, Moon Tan shreds, I love Moon Tan. 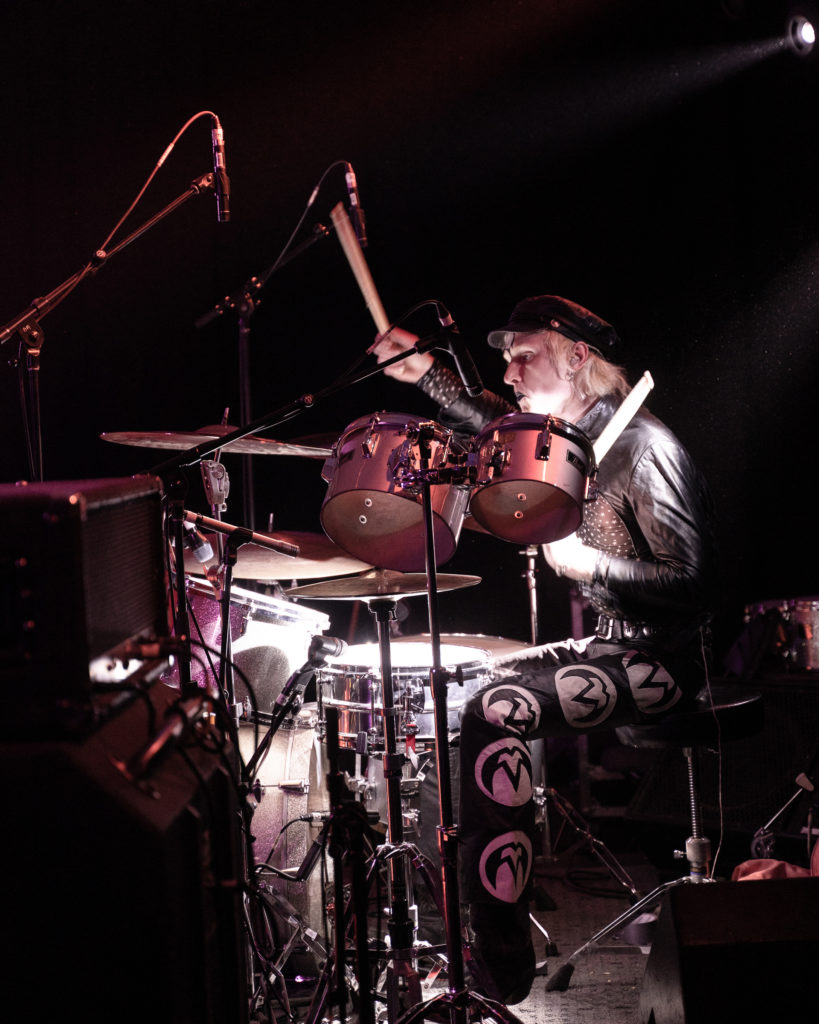 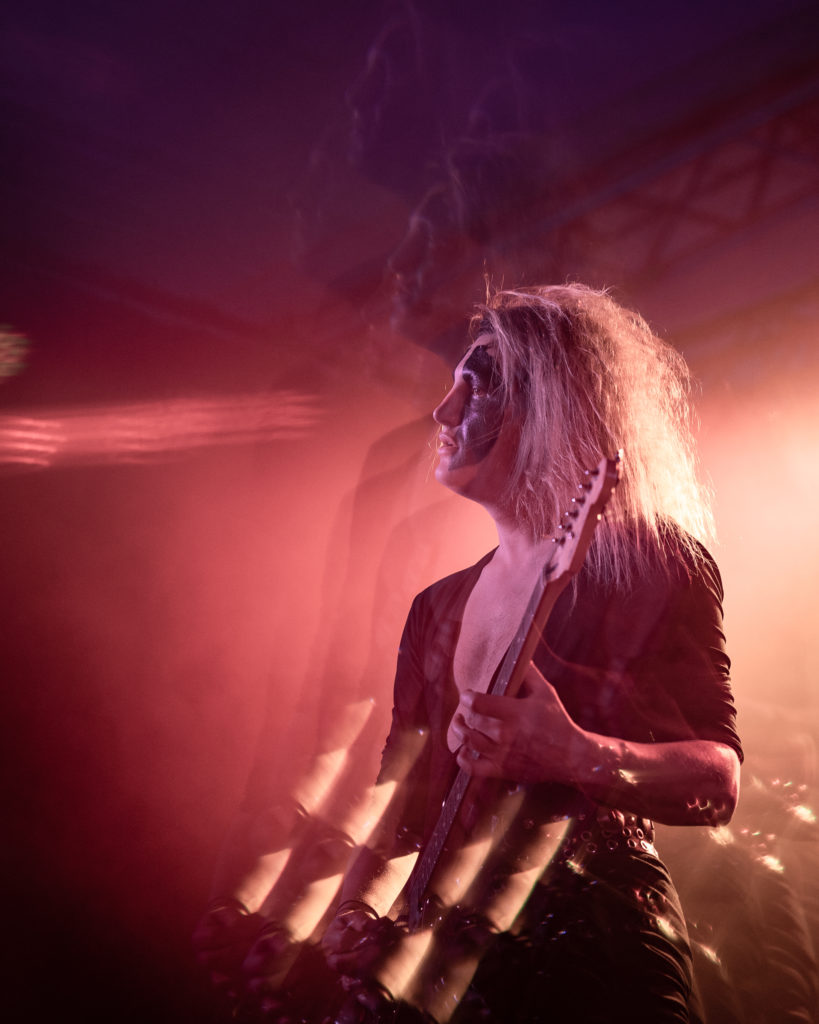 The night ended with Boniface, from St. Boniface, playing in St. Boniface, so needless to say, the crowd was stoked. Whether a new tune or not, the crowd was on every word. The band is easy to love, good pop music to dance to. By the end of the show the band and crowd were jumping and dancing so hard the stage was shaking! The programming for the stage and the bands who brought it all they had made for an incredible week of local music. 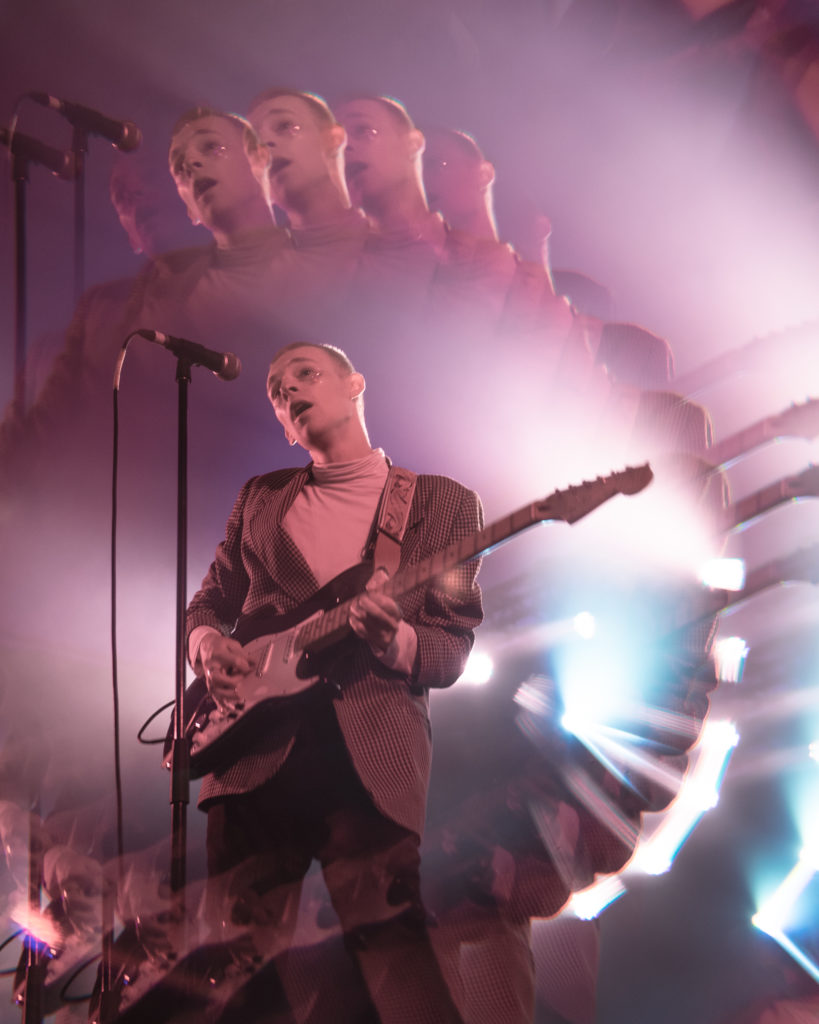 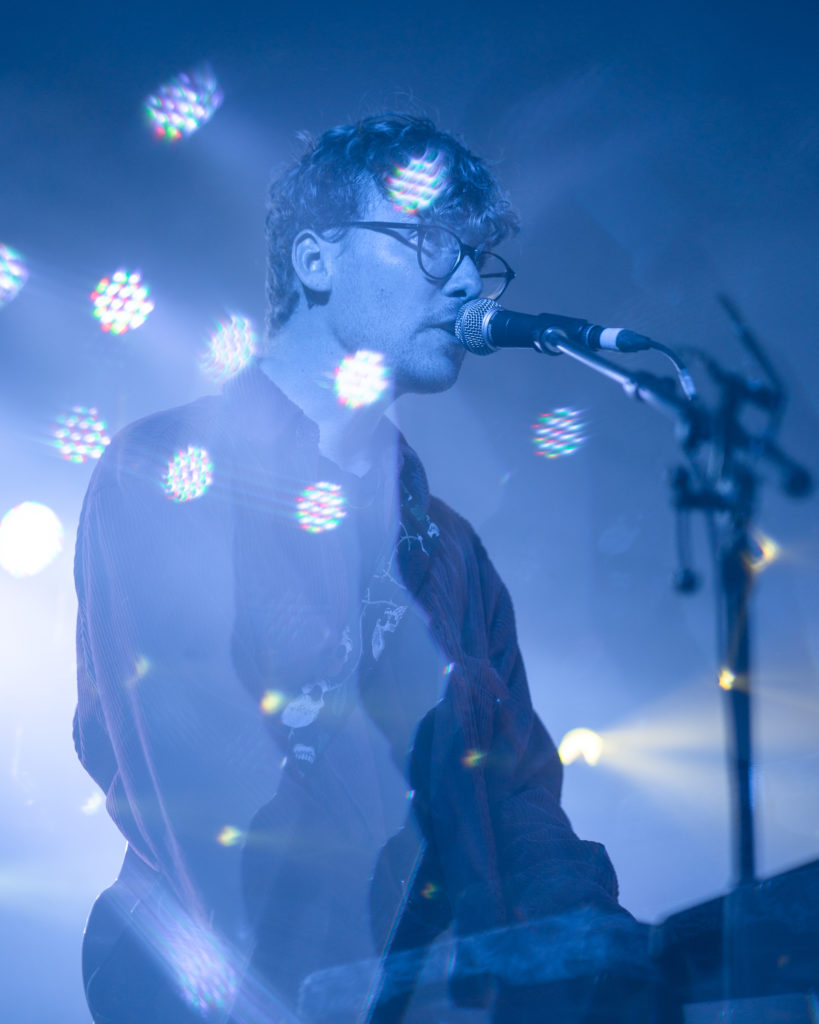