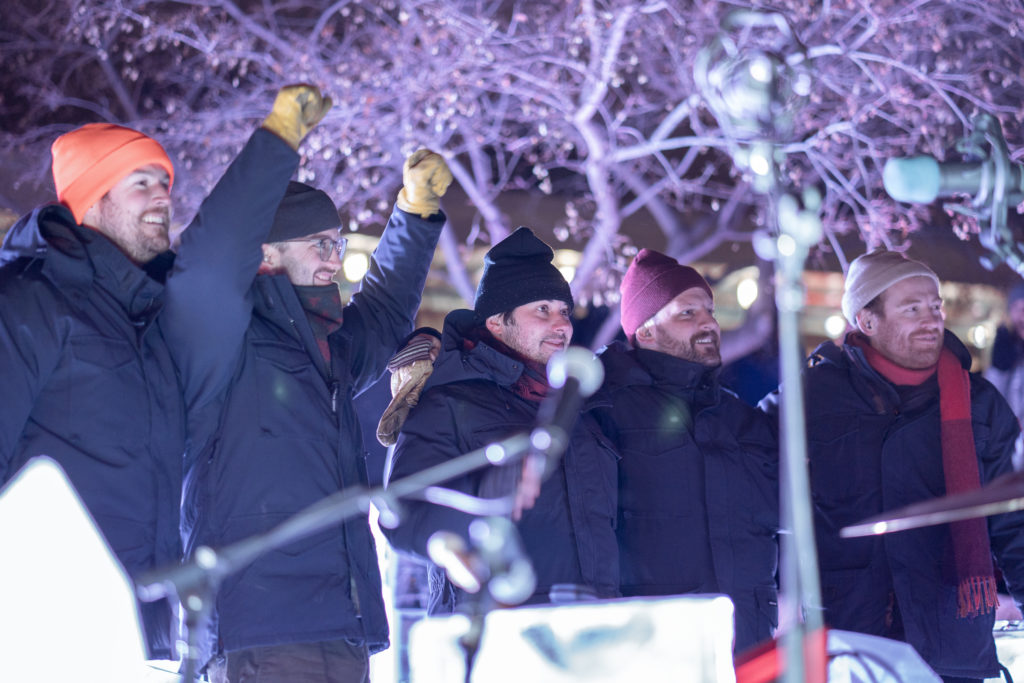 Glacial at The Forks was a pair of free shows featuring local indie band Royal Canoe. The live performance included instruments and stage design comprised of approximately 125 blocks of ice harvested from the marsh and brought to The Forks from Fort Whyte. They were deposited in their resting place on the steps of the Johnston Terminal where Luca Roncoroni, Norweigen architect of the Swedish Ice Hotel, constructed the stage along with Sputnik Architecture based on what drummer Michael Jordan described as the reimagination of Superman’s Fortress of Solitude. The evenings also featured live projections on to the Johnston Terminal by Saskatoon-based visual artist Stephanie Kuse. 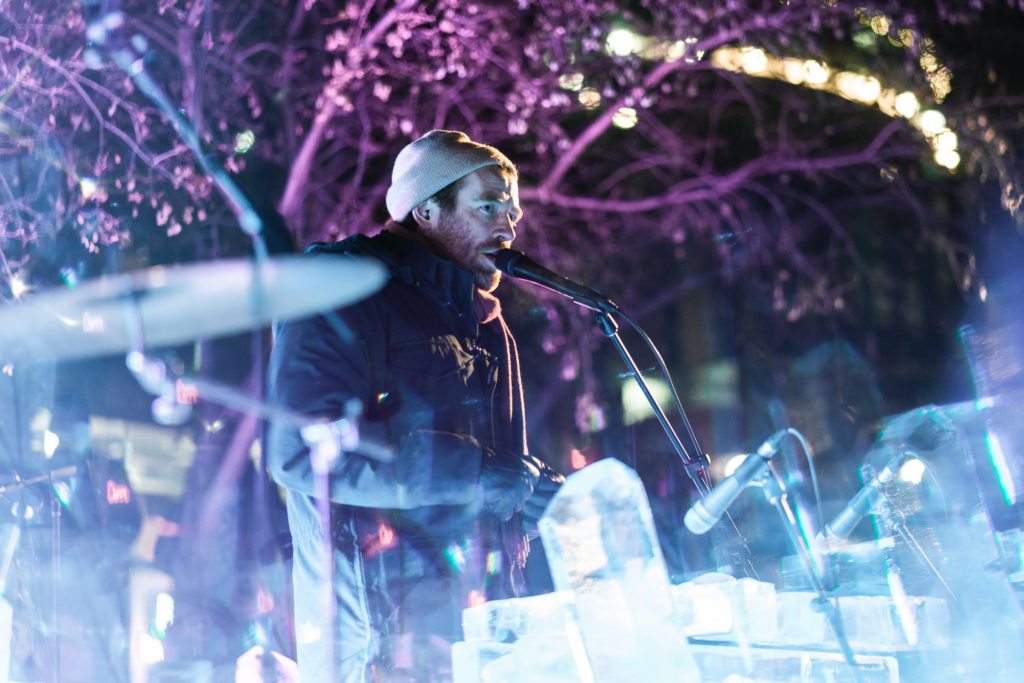 As a Winnipeg staple, most local music buffs are familiar with the Royal Canoe catalogue. The pair of performances was an opportunity to experience something completely new with at least hundreds, perhaps thousands of locals. The media buzz for the performance didn’t prepare audiences for the show about to transpire as audible gasps sporadically rose from the audience as the ice lit up and the band described their newly constructed set-up. What media teased approaching the spectacle was only the tip of the iceberg though the band that has made a career from doing the charging head-on into the unexpected. 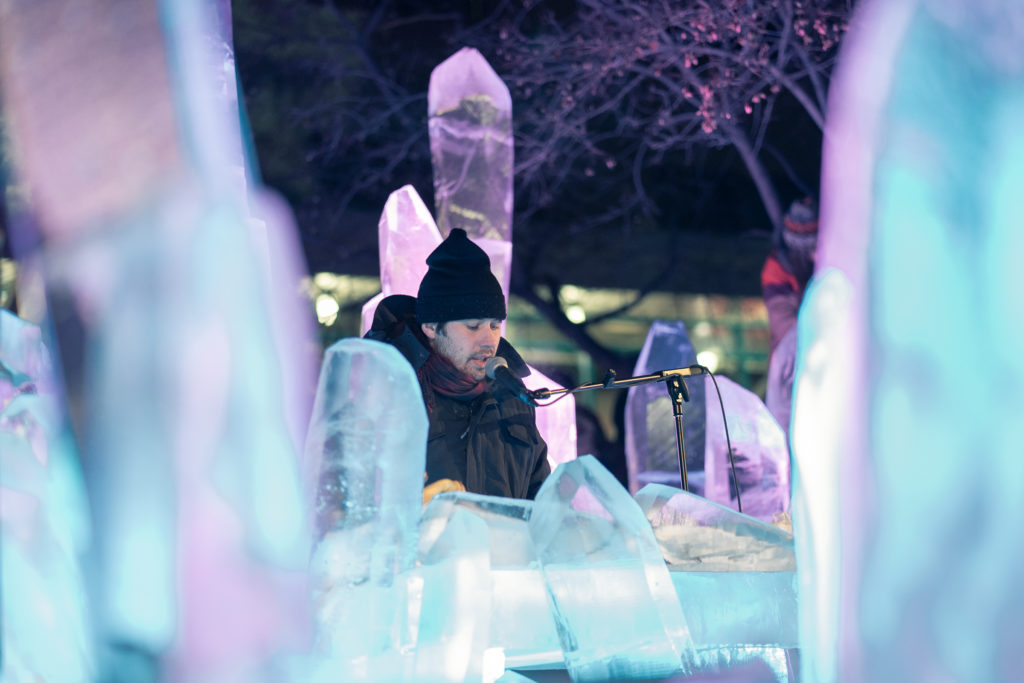 The band aptly pointed out how the event could only happen in Winnipeg. Only we could shrug off minus temperatures to go and see a band play a show made of lake. The Saturday evening show followed a warm day, which required retuning ice notes to perfection, a task that took previous hours of ice work and manipulation, now only taking several quick back and forth affirmations before they were carved to their assigned tuning. 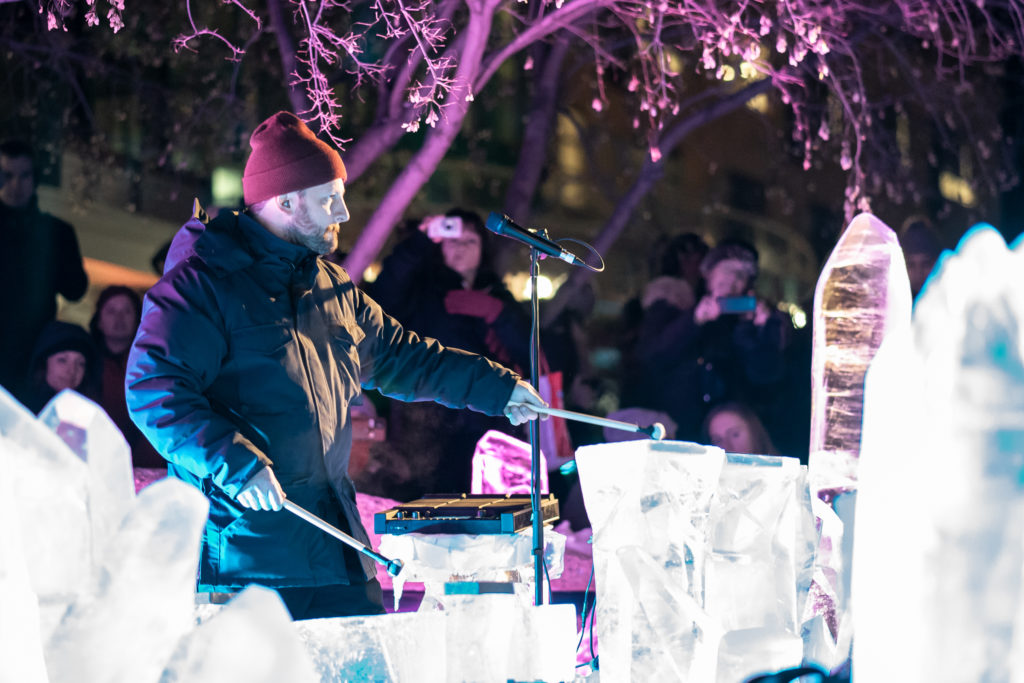 The show started with the illuminated ice fortress with contorted Royal Canoe songs ringing over the packed crowd. Though not incredibly divergent from their normal sound, the band had clearly grappled with how ice was the focus of the show. They didn’t try to play their songs to sound like the recorded versions. The songs full embraced the tonal qualities of their materials.

As Matt Dirks, the stage manager and “ice-tech,” changed over icy xylophone keys, vocalist and ice-xylophonist Matt Peters walked the audience through the incredible instrumental set-up.

Jordan on drums; a kick drum made of ice, a high hat constructed from a “smoosh station” where Jordan used a gloved hand to manipulate ice chips into a pseudo-high-hat, an ice wash-board, and a sample pad with various icy sounds. 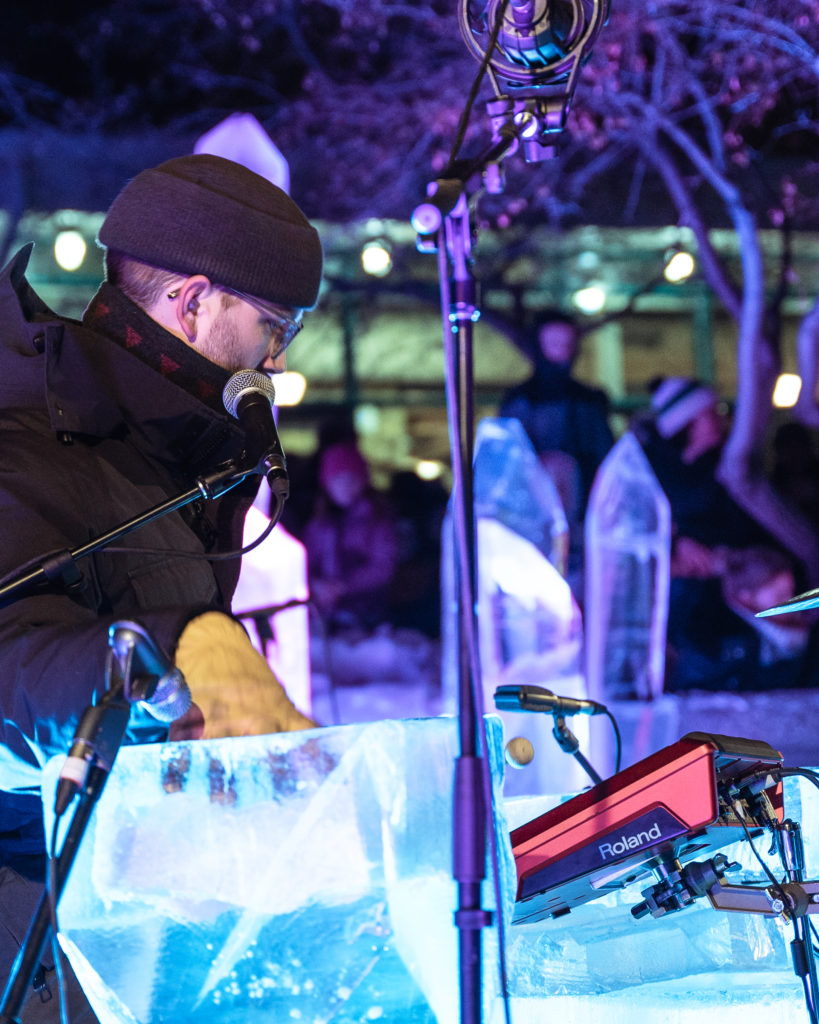 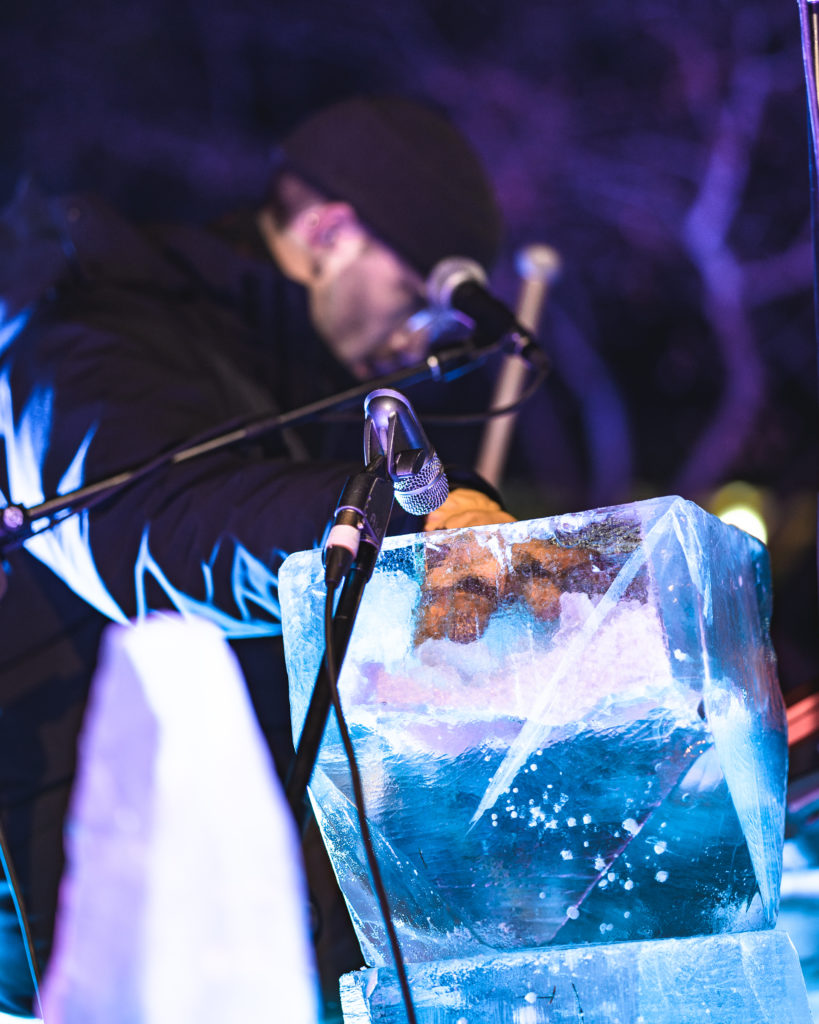 “All the sounds on the drum pad are just recordings we did with pieces of ice in Bucky’s garage.”

The sounds of smashing ice were manipulated in to snare and percussion sounds. “That’s us throwing a piece of ice on the cement,” Peters said of Jordan’s snare.

Matt Schellenberg and Brendan Berg played synths with manipulated ice tones. Schellenberg’s crystally ringing notes, played in the form of a keyboard, rang out pure and crisp in the cold night as he demonstrated. Berg’s instruments included a large block of G-tuned ice, an ice shaker, and the xylophone tones from Peters’ set up lowered four octaves “Somehow it turns into this beautiful 808 sounding bass which is kind of remarkable.” 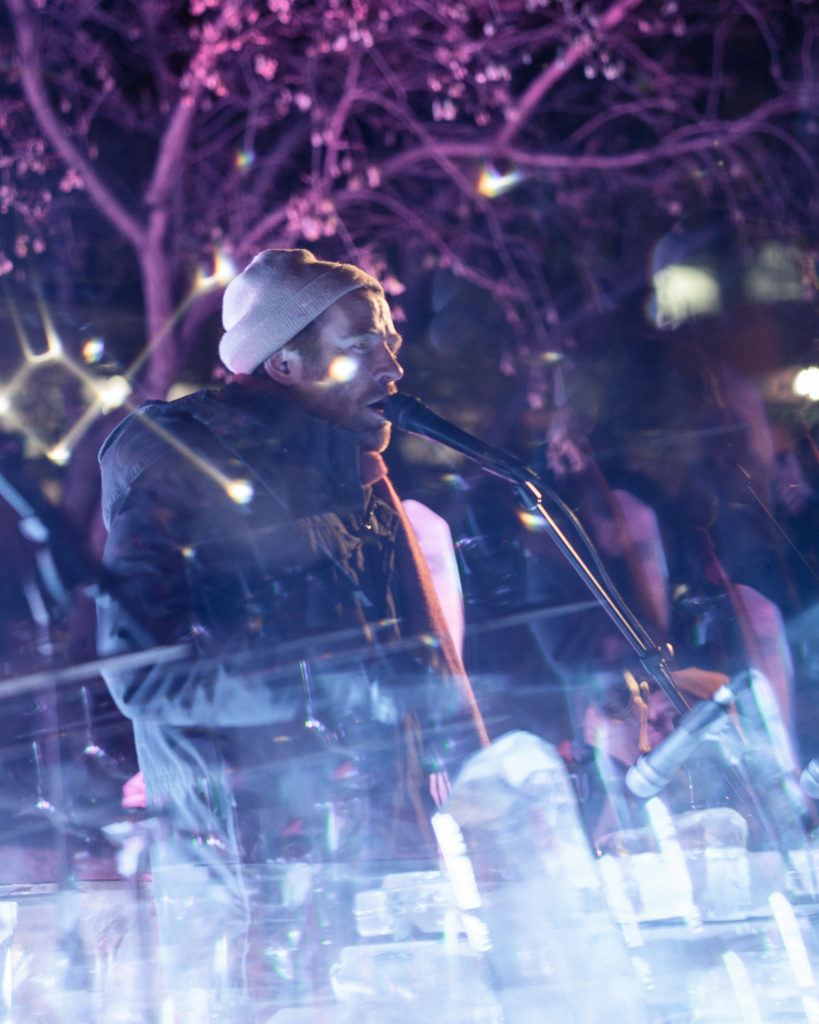 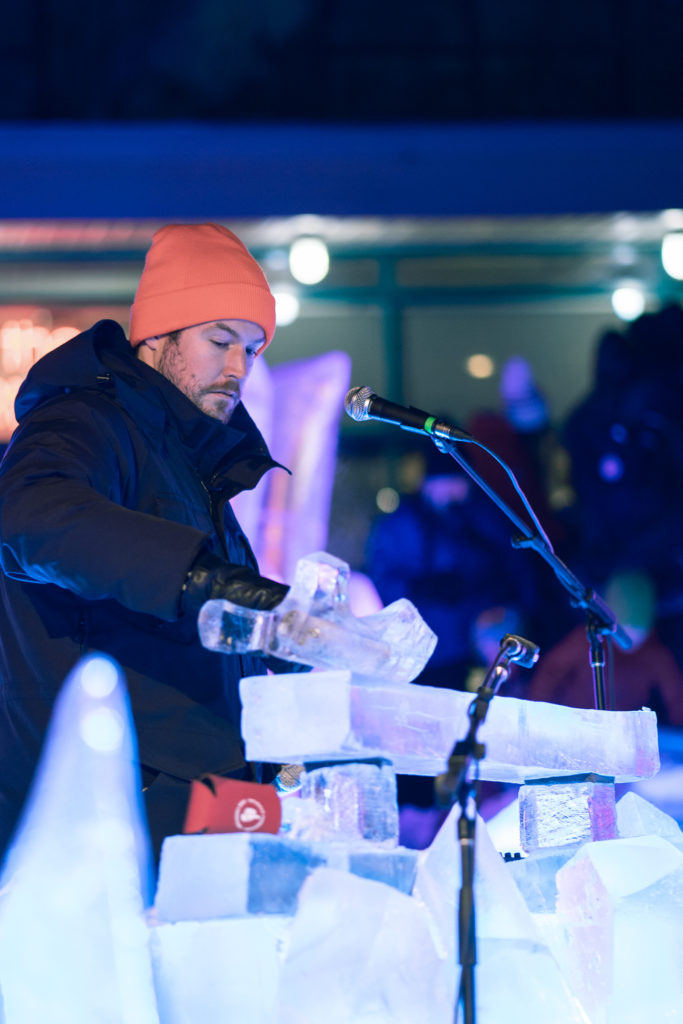 Bucky Driedger played sample pads imbedded in ice with cued up lights that illuminated his instruments as he played. At one point during the evening, Driedger emotionally expressed how grateful he was to share the reimagination of their songs, some of them Royal Canoe have been playing for a decade.

That moment was an opportunity to realize what was really happening behind the scenes and in front of our eyes. The time, imagination, and dedication and perhaps hours upon hours of failure and frustration the architects and artists lent to this project fully offered a holistic dedication to the project and the remarkable love us Winnipeggers have for winter. 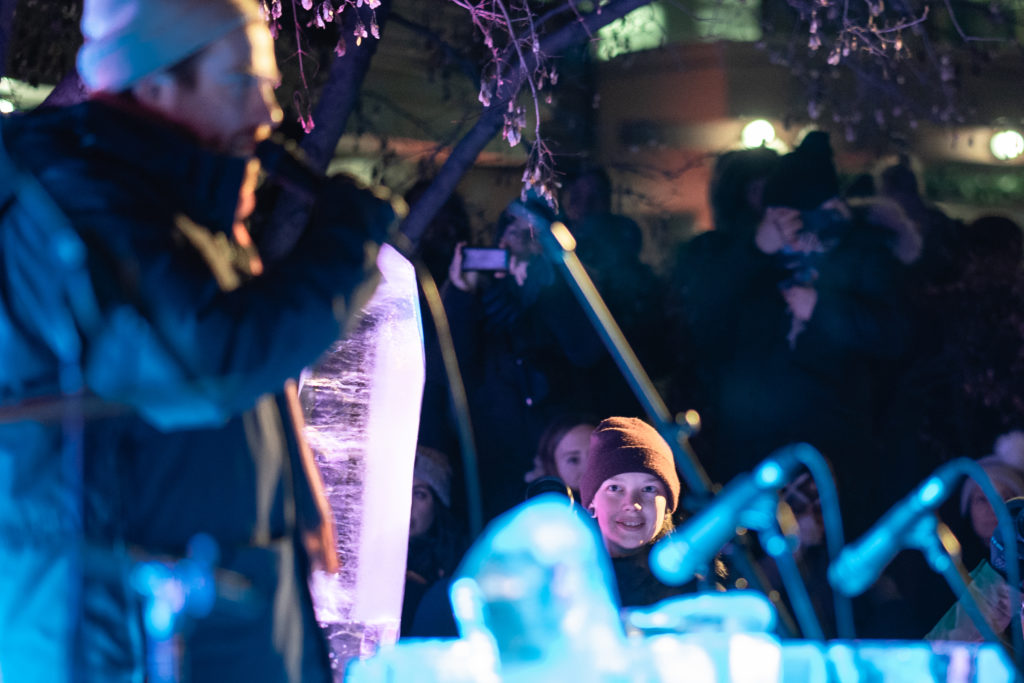 All photos by Mat Kleisinger. @kleistea on IG